Saroj Khan comments defending the Casting Couch says “Artists sell themselves even though they have talent” At least Film Industry gives work, Doesn’t Rape and Abandon. She made this shocking comment defending Casting couch during a press conference on Thursday. News report agency ANI tweeted updates about Saroj Khan’s comments in which she says that this process is coming from old times and why should only the film industry be targeted.

She said that this process is based upon the principal of consent and the artists always have a choice whether they want to do it or not.

If you do not like it then you shouldn’t choose to work for someone who asked for favors. If you have talent then why would you sell it? Ms. Khan also warned the reporters for shaming the film industry says

These comments have started a heated up debate on the social media. Saroj Khan has apologized for saying such things and many famous celebrities has shamed Ms. Khan for this. But on the other hand some people took Saroj’s side saying that this is the deep dark secret of Bollywood which is not hidden from anyone. We’ve seen it going on for years but now when someone says it loud and clear, why do we start hate on them?

I lost respect for you Saroj ma'am. Being an elder you should give a good path to young actresses. It is giving a wrong indication that you have to be a slave to producers: Sri Reddy (actress who alleged that women are sexual exploited by producers) on Saroj Khan's remark. pic.twitter.com/I9TWmLahrX

Can’t begin to think what thousands of girls go through in the hope that their “dreams” will come true! Nobody wants to sleep with someone for work. But they are made to feel it’s the only way & “acceptable”. And for those who don’t, it’s a tough road! This has to stop! #TimesUp

Livelihood can be provided to them without asking sexual favours too. No?
What's wrong is always wrong nothing can defend it.#SarojKhan

#sarojkhan i am indian and i am ashamed of bollywood

No point in Shooting the messenger. She just spoke about the bitter truth !! It has been an open secret and most Bollywood actors/actresses who pretend to be holier than thou need to wake up & smell coffee !! #SarojKhan

It is a reality of Bollywood ..90% actresses r Victim of Casting couch type physical sexual harassment ?
sex for movies is a casual culture.. It has been revealed by Top actresses in past & present & now #sarojkhan statement is mirror of Dark side of Bollywood hw women r treated

What the hell! What's wrong with this Woman, has she lost it completely! How can she defend Casting couch! It's akin to defending rape!

It gives work? What's wrong with you lady?

Exchanging bodily favours for a job is very inhumane as most of the encounters like this are forced. Without consent many young aspirants are being forced into submitting to this human racket. What is your take on Casting Couch? Do you think Saroj Khan being a veteran in the industry, should have made a comment like this? Let us know in the comments below.

Aishwarya Sharma From Ghum Hai Kisikey Pyaar Meiin, ‘Not Easy To Play Pakhi As It Is Extremely Intense’ 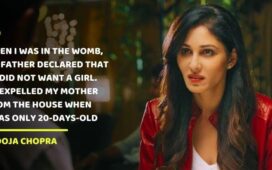