The Has Received A Warm Welcome On Social Media We all know that the fourth installment in the “Hate Story” series will be released this year. The trailer of Hate Story is out it has been received warmly. The trailer has received more than 175,000 views on YouTube within 24 hours of releasing.

The Trailer For Hate Story 4

The trailer looks promising. The first half of the trailer seems like a love story, but we all know it is not a love story. You may have spotted the major twist in the plot can be predicted from the trailer. A girl causes hate between two brothers. However, there will be some other shocking twists in the plot.

Urvashi Rautela is playing the leading role. She is seeking success and it seems like she would grab it at any cost. She is looking insanely hot in the movie. Urvashi was seen dancing on the revitalized song “Aashiq Banaya Aapne”, she bold appeal was off the chart in this one.

The trailer flashed some of the action scenes that added to the pleasantness of it.Judging by the trailer, the movie will be an ultimate dose of romance, action, and thriller. The trailer surely got us excited about the movie. Directed by Vishal Pandya, the movie is all set to release on 9 March 2018. Although, the release date is not that much far away it is hard to resist the temptation of the movie.

Check out Urvashi Rautela childhood pictures. When you see Urvashi Rautela’s mom, you will be confused that whether she is her elder sister or her mom. She is equally stunning. Check her out. 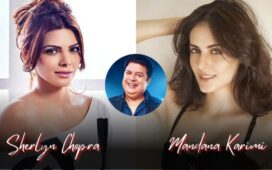