3 Dev will release on 1st June The actors shared the second poster for their film on social media. Karan, Ravi, and Kunaal can be seen laughing in the frame while covering the wall painting of the holy trinity.

The tagline for the film reads, ‘Undercover Bhagwan’. Looks like Karan, Ravi and Kunal will play the human forms of the deities Lord Brahma, Lord Shiva and Lord Vishnu. Chintan Rana producer of Hindi film 3 DEV along with Ayub Khan of Sky Enterprises launched the 2nd poster of their film with actors Karan Singh Grover, Kunaal Roy Kapur, Ravi Dubey and Priya Banerjee at the Water Kingdom, Gorai. The cast also celebrated the 20th anniversary of Water Kingdom. The film is made under the banner of R2 Phillum Productions and is directed by Ankoosh Bhatt. The film will release on 25th May 2018 all over.

Trailer for this exciting movie will be releasing tomorrow. Are you guys excited? 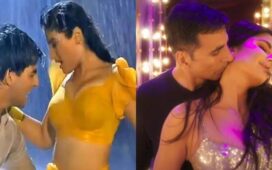