The IIFA 2018 event was held in Bangkok. The award shows are the opportunities when the Bollywood stars come under one roof. From awards distribution to the on-stage performances of the stars turned the event into an exciting one. Irrfan Khan was awarded as the best actor. He is currently battling against a rare disease. Moreover, Late Sridevi was awarded as the best actress of the year and her husband Bonny Kapoor received the award on her account.

Dresses Of The Celebs

Another thing that attracts our attention is the dressing sense of the stars. The celebs think the events as the opportunity to make statements with their fashion sense. So let us take a look at some of the best and worst dresses of IIFA 2018. Here Are Some Of The Best Dresses Of IIFA 2018,

. @ShraddhaKapoor has her Cinderella moment at the green carpet. #IIFA2018 pic.twitter.com/RSSl4pgug2

Shraddha rocked in the pink dress with was detailed with maroon color for some fraction of it. Admittedly, she looked like a fairy princess in it.

Shimmer, sizzles and shine is the theme for @kritisanon tonight!#IIFA2018 pic.twitter.com/swsejRlmeF

In a dazzling silver dress, Kriti Sanon stole the show. She was looking extremely gorgeous in that.

Ayushmann does know how to pull off a style with class. No doubt, he was looking classy in this one.

. @deespeak and her husband dazzle on the green carpet at #IIFA2018 pic.twitter.com/pQ9gpPoEtH

The Sanju actress Dia Mirza attended the event with her husband and she captured our eyes with her dress.

Speaking of class, Arjun Kapoor never misses any chance to display that with his style.

Kartik Aaryan is one of the stars who give us style goals time after time. The classic black suit-style captured our eyes for sure.

We have never seen Urvashi making any fashion blunders. This time set the green carpet on fire with her style.

There were also some stars who made fashion blunders. Let us take a look at some of the worst dresses of IIFA 2018. 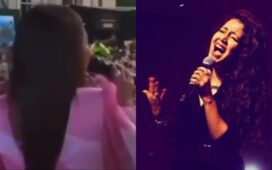