During the promotion, when it was asked to Kriti that whether she ragged boys in real life, Kriti confessed that she was a ‘gundi’ kind of person in her younger days. Talking about the incident, Kriti said,

“When I was in 12th grade, I went to an all-boys college to attend a college festival. Over there, a guy clicked my picture without asking me. Camera phones were introduced back then. Later, I walked up to him and said handover over the phone to me, I said give me the phone right away. Once he gave me his cell phone, I went straight away to his headmaster and handed that guy’s phone to him. And I told him (to the guy), aaj kar diya, dobara himmat mat karna (don’t dare to do it next time).”

“Cut to five-six years later, I reached at my friend’s wedding. I went on the stage and wished (her). So the groom asked (the bride)who is this? I have never met her earlier. So, the girl (Kriti’s friend and the bride) turned around and told (him) that this is the same girl who handed over your phone (to the headmaster).”

Kriti Kharbanda said that while she didn’t recognize the groom. However, she was ’embarrassed’ after learning about it. When this incident took place, she also said the friend was with her, and the couple had started dating. Kriti Kharbanda is dating actor Pulkit Samrat. The duo has confirmed their relationship in 2019 and came together while shooting for the movie Pagalpanti. Kriti also said that they are looking for marriage currently. 14 Phere will release on streaming platform ZEE5 on July 23. 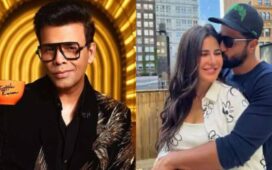