Kriti Sanon is one of the finest actresses in Bollywood currently. She earned the respect and love from the audiences because of her performances in the movies. Her expressions are amazing and she looks beautiful on the screen as well. Ever since her debut movie Heropanti, she showed her efforts in every character she played on screen. Many times actors get trolled for irrelevant reasons as well. There are many people who do such comments that are really not needed. One such incident happened between actress Bhairavi Goswami who was in the movie Hate Story and Kriti Sanon.

This Is How It Started

This incident took place when Kriti Sanon’s movie Raabta did not do well at the box office. It all started when Kriti Sanon tweeted a video of her dancing to the Hawa Hawa song from Mubarakan. Kamaal R Khan shared this video and wrote,

KRK is known for its straightforward comments and tweets. But the shock came from the actress not known by many as Bhairavi Goswami.

“She is really behaving like a deranged woman. How did she become an actress. No headlight, no bumper😳. Even college students look better.”

she is really behaving like a deranged woman. How did she become an actress. No headlight, no bumper😳. Even college students look better https://t.co/SAPEuv80sc

During an event, when it was asked from Kriti Sanon about Bhairavi Goswami’s comment. Kriti told,

“Who is Bhairavi Goswami?”

When the media told Kriti Sanon about Bhairavi Goswami that she had acted in the movies like Hate Story; Kriti Sanon replied to it,

“I think, I’m just happy for her. She got a lot of publicity. Now you guys know her name also, so yeah.”

Well, that was an epic reply from Kriti Sanon, and it really gave it back to Bhairavi Goswami. But such cheap comments coming from a woman to a woman is embarrassing. What do you guys think? Let us know in the comments. 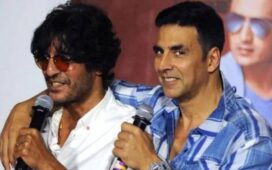