Raksha Bandhan OTT Release Date: Here Is When And Where You Can Akshay Kumar's Film

Raksha Bandhan will stream on ZEE5 Raksha Bandhan has collected approx 61.58 crores at the box office. The film is a family entertainer, and the business got affected because of another big release Laal Singh Chaddha and the Boycott Bollywood trend in August did not do well for the film as well. But word of mouth is good, and the audience who were keen to watch Raksha Bandhan can now watch it online. Here is the review of the film.

The bond between the siblings is a treat to watch. Writer Himanshu Sharma and Kanika Dhillon’s storytelling is fantastic. The dialogues of Raksha Bandhan are top-notch. They will make you laugh and even make you emotional. The first half has humor, while the second half makes you emotional. The film will make you laugh and equally makes you cry. It is based on Indian culture and a beautiful brother-sister bond. Raksha Bandhan delivers a strong and solid message. Watch Raksha Bandhan with your family streaming from October 5 on ZEE5. 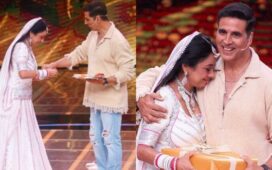