Rashmika Mandanna is one of the most beautiful and famous actresses in the Indian entertainment industry. Due to her natural expressions, beautiful face, and lovely smile, she is the national crush of India. She was last seen in the film Pushpa: The Rise opposite Allu Arjun. Rashmika Mandanna played the role of Srivalli and the audience loved her performance in the movie. Recently, Rashmika Mandanna was announced as a female lead in Sandeep Reddy Vanga’s Animal opposite Ranbir Kapoor.

Rashmika Mandanna said that working with Ranbir Kapoor in the film Animal is like a dream come true moment for her. Talking about the role, Rashmika said,

“I am so thrilled, that the announcement is finally out. I had been waiting to tell the world about it, because not only is the story is so amazing but also the team I get to work with. It’s like a dream come true. I’m looking forward to this summer, and honestly can’t wait for the film to go on floors soon.”

She also spoke about her experience of hearing the official announcement. Rashmika added,

“The announcement happened while I was on sets of Goodbye. The past few days have been truly overwhelming, as I can finally talk about ‘Animal’ and other upcoming projects.”

Rashmika has some big projects coming up. She will be seen opposite Sidharth Malhotra in the film Mission  Majnu, with Amitabh Bachchan in the film Goodbye and Animal opposite Ranbir Kapoor, Anil Kapoor, and Bobby Deol. 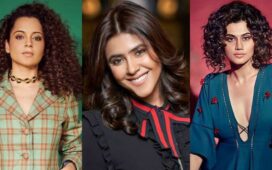