Asim Riaz is one of the most popular contestants in the history of Bigg Boss. Recently the season 13 of Bigg Boss is over and Asim Riaz falls short to Sidharth Shukla to win the trophy. But, there is no denying the fact that Asim Riaz has won millions of fans during his stay at Bigg Boss house. Now after exiting from Bigg Boss house, Asim Riaz’s career will surely be going to take a huge jump. Karan Johar has launched many actors in Bollywood. The actors like Alia Bhatt, Varun Dhawan, Sidharth Malhotra, Tara Sutaria, Jhanvi Kapoor, and Ananya Panday and many more are launched by him. Now as per the reports, he will be launching the daughter of Shahrukh Khan, Suhana Khan alongside Asim Riaz in the film industry.

There are many reports that are making rounds on social media that Suhana Khan will be making her Bollywood debut opposite Bigg Boss 13 Runner-Up Asim Riaz in another installment of Student Of The Year. Multiple sources shared this news along with the popular critic Kamaal R Khan. He tweeted about the same. Check out below.

Bigg Boss 13 Runner Up #AsimRiaz to romance #Suhanakhan in #KaranJohar next installment of Student Of The Year, as per the reports..
But it is yet to confirm by Karan Johar & Asim Riaz..#AsimDeservesTrophy pic.twitter.com/aimQe72Pnb

The franchise Student Of The Year is known for launching new faces in the Bollywood. In the first franchise, it was the debut for Alia Bhatt, Varun Dhawan, and Sidharth Malhotra. While in the second, it was Ananya Panday and Tara Sutaria who made their debut. If we go with the reports, the third installment will have Suhana Khan and Asim Riaz. Though the official announcement of this is yet to be done by Karan Johar and Asim Riaz. But surely with such a huge fan following of Asim Riaz, the audiences will be very excited to see him alongside Suhana Khan.

But, for your knowledge, Asim Riaz has made his Bollywood debut in Varun Dhawan’s movie Main Tera Hero. Though his role was too small. But this will be his movie in which he will be launched as a lead. What do you think about this? Will you love you to see Asim Riaz and Suhana Khan together? Let us know in the comments below. 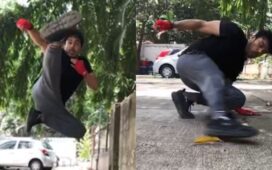