Abhishek Bachchan, Nimrat Kaur, and Yami Gautam starrer Dasvi is streaming on Netflix India and Jio Cinema. Maddock Films and Jio Studios collaborated with Netflix again after Mimi for the streaming of Dasvi. It is directed by Tushar Jalota. Dasvi is a film with the purpose of the right to education and is a decent watch.

The story revolves around a corrupt politician Ganga Ram Chaudhary essayed by Abhishek Bachchan. He is a Chief Minister of the fictitious state name Harit Pradesh. After his name surfaced in a scam, Gangaram Chaudhary is sentenced to judicial custody. To retain the chair in the family, Ganga Ram ensures that his wife Bimla Devi portrayed by Nimrat Kaur to take over as the Chief Minister in his absence. Initially, Bimla Devi does not want to get into politics, but she suddenly changes once she tastes fame and power.

In the prison, Ganga Ram comes across the honest jail superintendent of police, Jyoti Deswal played by Yami Gautam. In the heat of the argument, Jyoti calls Ganga Ram illiterate. This triggers the ego of Ganga Ram Chaudhary and he vows to pass class X ‘Dasvi’ or else he will never become Chief Minister again. Ganga Ram Chaudhary started studying and is lost in the world of education. On the other hand, his wife Bimla Devi starts learning political tricks to stop her husband from reclaiming his position. Will Ganga Ram Chaudhary succeed? Watch the film to find out.

The film is inspired loosely by the life of former CM Om Prakash Chautala. Dasvi gives the solid message that it is never too late to learn something new. Director Tushar Jalota has put emotions and a message along with humor. Dasvi has some funny moments that will entertain you. Though the film slows down in patches but picks up in the end. The dialogues are good and some punch lines are very well written.

Talking about the performances, Abhishek Bachchan gets into the skin of Ganga Ram Chaudhary. He totally lives the character. Though it may not be his best, it is one of the finest. Nimrat Kaur excelled in the role of Bimla Devi. She is such a versatile actress be it in The Lunchbox, Airlift, The Test Case, or now Dasvi, she played the character with perfection, simply outstanding. Yami Gautam also played her role with maturity and looked amazing as a jail superintendent. She is such a promising actress with impeccable talent. Dasvi throws the light on the importance of education. The music is forgettable except for the song Maccha Re. We give Dasvi 3 stars out of 5. 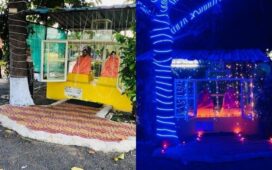