ULLU is offering multi-genre content for its audiences. Since last year ULLU has worked on their niche and brought the content inspired from the true incidents. After Peshawar and Paper, the ULLU app has brought another thriller for its audiences Assi Nabbe Poore Sau. Raqesh Bapat, Vikram Mastal, and Aastha Chaudhary, starring web series Assi Nabbe Poore Sau trailer, is released. The web-series is a story of the murderous killing of 100 innocent children. Raqesh Bapat and Vikram Mastal will be in a never seen before avatar. The show is inspired by the heinous crime of a man whose intention was to kill 100 children and see their mothers crying for their children.

Akshay Singh has directed this web-series. On the launch of the trailer, Vibhu Agarwal, the CEO of ULLU told,

“A lot of research and effort is put into making a show which is sensitive, thrilling, and gripping all at the same time. At ULLU we believe in telling stories that exist but have never been told. Assi Nabbe Poore Sau is a rousing tale of a demon who was unfortunately born as a human, that will make your stomach churn from within and every scene will make you angry and somewhere gasp in amazement at how someone can stoop to such levels of inhumanity to vindicate a personal loss. We hope the story reaches a million houses and the audiences enjoy our earnest endeavor.”

Vikram Mastal, who is playing the role of the cop Farhan Khan said,

“I have never played this kind of role. I have played mythological roles like Lord Hanuman in Ramayan, and romantic roles in Suspense and Sakshi. The character of the cop made me goosebumps. I have lived the character of a cop and understood that the most challenging work is of cops. They work day and night without fail for our safety. I salute them for the efforts they put into our safety. I would also like to thank Akshay Singh, the director of Assi Nabbe Poore Sau for believing in me for such a challenging role. We the team of Assi Nabbe Poore Sau hopes that the audience will appreciate our efforts.”

Raqesh Bapat, who is playing the role of Junaid Alam told,

“It took me some time to picture myself as Junaid Alam. I have always played a romantic boy next door on screen and to transform myself into such a strong multi-layered and extreme grey character got me the jitters. I am extremely thankful to Akshay Singh, the director who thought that I shall be the perfect fit for the role. It was only his belief and imagination that made me take up this challenge. Also, I am glad, my audiences will get to see me in a very different avatar.  Fingers crossed, I hope people like our efforts.”

Watch the trailer of Assi Nabbe Poore Sau below.

The trailer is looking intense, and the glimpse of Raqesh Bapat and Vikram Mastal’s performance is making it exciting to watch. The series will have a total of eight episodes, with around 22 minutes each. The series will be available on ULLU App from March 9, 2021. 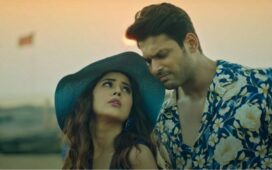