Saba Khan And Somi Khan Are Aiming At Dipika Kakkar In the previous episode of Bigg Boss, we have seen that the first task of this season has been started and the Season 11 contestants Hina Khan and Hiten Tejwani visited the house and kicked off the task. The singles fired some questions towards the jodis which they had to counter. The action and drama continue on the Day 2.

A lot of questions were raised about the relationship between Anup and Jasleen. Moreover, it was a test of patience for the duo and they did fine while answering them. However, the heat was raised in the process. Apart from that Neha Pendse put the duo of Deepak and Urvashi on the back foot with here questions and the duo seemed to have some problems with that.

Half of the task was completed in the previous while the rest will be held in tonight’s episode. A promo has been shared by colors TV which states that the winner of Season 11, Shilpa Shinde along with Karan Patel join the house of Bigg Boss for this episode and will pursue the task further.

Khan Sisters Vs Dipika On Day 2

The duo of Saba Khan and Somi Khan aimed at Dipika Kakkar and generated a heated argument in the show. That surely made the Khan Sisters in the hit list of Dipika. So she challenged them in the task.

Dipika Get The Better Of Somi And Saba

In the promo video, the Khan sisters and Dipika Kakkar were seen performing the task. Deepika said that she found Saba and Somi a bit extra impulsive. Furthermore, she said that they do not have a high patience level which is required for this game.  The Khan sisters (Somi and Saba) tried to counter that but came up short. As at the end of the promo video it is shown that the Jodi is weaker as compared to the single contestant.

Undoubtedly, tonight’s episode has a lot of fun in store for us. Are you excited? Share your thoughts in the comments.

Check out the list of all the contestants of this season. 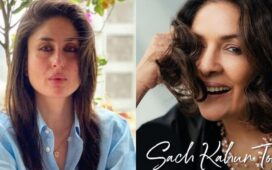