Debina Bonnerjee On Her Second Pregnancy, 'For Years I Believed My Body Is Not Capable Of Naturally Conceiving' On April 2022, well-established television actress Debina Bonnerjee and Gurmeet Choudhary welcomed their first child. And they are all set to embrace parenthood for the second time. Just four months after welcoming their first child Lianna, Debina opened up in a youtube vlog about her second surprise pregnancy. In her subsequent vlog, she shares her experiences, complications, and also how she was bleeding throughout her 1st trimester. She titled her video, “I was bleeding throughout my 1st trimester. 2nd pregnancy podcast.”

Read on about her surprise pregnancy, how she dealt with the bleeding, and how it is normal.

How Did The Couple React When They Got To Know They Are Pregnant?

Debina talks about how, “Nearly a month after Lianna was born, I was feeling a little unwell. It wasn’t that I had any symptoms like nausea, but I was feeling very tired.” She believed that it was mostly because now she has a young child, and days are very hectic. However, she still kept on feeling uneasy.

“But I was getting more tired; I thought I have to check if I am pregnant or not.” Therefore, she after a lot of deliberation, she finally decided to take a pregnancy test, and it came out to positive. She had a major emotional outburst. She told how she was shocked, overjoyed, and confused about what to do next. In her vlog, she mentioned how her actor-husband was completely in disbelief when she told him they were expecting again. They soon decided to consult their doctor.

Medical Hindrances And Then Medical Certainty

In her vlog, Debina opens up about how she always believed that her body is not capable of naturally conceiving a baby. She says, “In the past 5-7 years, I lived with the thought that my body has lost the natural capacity to conceive. My body is not up to the mark. I had endometriosis, Adenomyosis, which is the ultimate obstruction to conceiving naturally. I had a decline in AMH, which was depleting at a very high rate. My quality of eggs were not good. Also, the major problem I faced was my uterus lining never forming well. My body was not at par to conceive naturally.”

After telling her husband Gurmeet about the pregnancy, he was completely unable to believe so. The reason was that they could not conceive a child on their own. Debina’s doctor was also shocked when she informed her about the test was positive. To have complete medical certainty, they did a small scan. The doctor revealed that the heartbeat was clearly audible. For both Debina and Gurmeet, it is nothing but a beautiful miracle.

Continuous Bleeding Throughout Her First Trimester

Earlier this year, this actor couple welcomed their first child Lianna via IVF technology. Lianna is the greatest of all blessings for them. However, after having Lianna, Debina had continuous bleeding, which did not stop for a long time. She shares in her vlog that if a lady is lactating or breastfeeding, she cannot conceive a child. So her being pregnant was never in their head. Even after getting certain about the pregnancy via test and listening to the heartbeat via a scan of her baby, the bleeding still continued.

“I was bleeding throughout my first trimester and was unable to find any help online.” She talks in her vlog about how whenever she searched bleeding and pregnancy on google, all she came across was it being a sign of miscarriage. “I was in tension as there was no benchmark to take an example from.” But finally, after the medical examination and 3-5 scannings, she got to know that it was nothing but an old clot that stayed. With a tone of relief, she further added, “After 2nd-middle of the third month, my bleeding stopped on its own.”

12th Week Scanning To Examine The Health Of Baby

In her youtube vlog, Debina shares how the eggs of women who are over 37 get matured. Matured to the extent that the chances of having chromosomal malformation increase. Therefore, after 12 weeks, a scan and blood test is required to be done to examine if the baby has any chromosomal malformation or not. She shares how all types of chromosomal defects can be detected in the double marker test. It helps to tell about the high and low risks as well. Thus, regardless of the fact that how tense she was, they decided to wait for 12 weeks.

Lianna Has Called Her Soul Mate

Debina says in her vlog with great joy that all her scans and blood tests on the 12th week came normal. Throughout her tough times, her mother was there with her. Be it the time she had a miscarriage in the past, her IVF journey, or the 12th-week scanning. Debina shares that her mother was the first person she shared the news of her being pregnant.  She further shared that her mother told her, and we quote, “Lianna is a soul, and she called her soul mate. Every person has a soul mate, and Lianna has called her soul mate.”

Debina also shared in the end that, her bleeding stopped within a day or two.  She shares that this was not even in her body’s or the doctor’s power. Everything happens as the almighty, please. She shares how she talked to her baby about how it has reinstated that her body is capable of doing everything.

“You have come here because you are here to stay. So fight for yourself and heal yourself.” 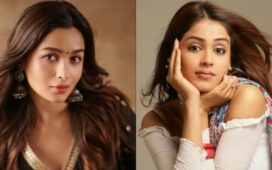