John Abraham, Disha Patani, Arjun Kapoor, and Tara Sutaria starring film Ek Villain Returns is released today at the theatres near you. It is a sequel to the 2014 film Ek Villain. Mohit Suri’s film is a gripping thriller that will keep you on the edge of your seat.

Gautam Mehra (Arjun Kapoor), a spoiled brat, creates a ruckus in his ex-girlfriend’s marriage. The video of him beating guests and security guards goes viral. Aarvi Malhotra (Tara Sutaria), an upcoming singer, turns his dialogues into rap and makes it viral. Gautam meets her at the music festival and helps her to get famous. Aarvi falls for Gautam, but Gautam backstabs her. He wanted to take revenge on her for using his video to gain fame. Months after, at Aarvi’s house party killer arrives and takes her along while killing and injuring others at the party. The cop feels that Gautam is the culprit.

Bhairav Purohit (John Abraham) is a cab driver, who loves Rasika (Disha Patani). Rasika is a salesgirl. Bhairav can do anything to earn Rasika’s love. He is a mysterious character. Suddenly, a killer gets active, and murders start happening in the city. He wants to become a messiah of the one-sided lovers. Who is the villain? Watch the movie to find out.

Mohit Suri has done a good job with this film. He kept the script and screenplay tight. Mohit Suri’s storytelling keeps you on the edge of your seat. Though the film has some loose moments, it confuses you in some parts but quickly gathers momentum. Aseem Arora’s dialogues are massy entertaining. The first half may leave you puzzled, and it will keep you guessing. The second half unfolds the truth with the flashback sequences. Do not miss the beginning of the movie. The climax and the suspense at the end will make you thrilled. Not many would have expected it.

Talking about the performances, every actor tried their best to fit into the character. John Abraham is a little scratchy at the start, but slowly his performance gets better. Arjun Kapoor has worked hard for this role and succeeded in it. His convincing act and impressive dialogue delivery give him an edge over the other actors. It is one of his best. Disha Patani, as usual, looked beautiful and sexy. She also gave a wonderful performance. Talking about Tara Sutaria, she is growing as an actor with every film. Her performance is much improved and one of the best she has acted to date. You will also see Riteish Deshmukh in the film.

The music of the film is soulful. A couple of songs, Galliyan Returns and Dil Rakh Diya are chartbusters. The cinematography is stunning. Though the film has illogical twists, it might not be everyone’s cup of tea. 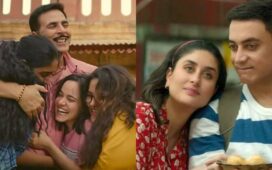