Ananya Panday On Trolling, Dating And Vijay Deverakonda On His Struggles, Here Are Some Revelations Koffee With Karan season 7, episode 4, premiered on Thursday. This episode’s special guests are Vijay Deverakonda and Ananya Panday. They will soon be seen together in their upcoming movie Liger. It features brave and beautiful people getting together to reveal their secrets. The fourth episode of the popular chat show was premiered on Disney+ Hotstar. Here are the few best moments from the latest episode:

1. Vijay And Ananya Entry On Koffee With Karan

In Koffee With Karan season 7, episode 4, Karan introduced the guests in quite an amazing way. While welcoming Vijay Deverakonda, he addressed him as the Arjun we were all ready for. Karan said this by taking Vijay’s most popular movie, Arjun Reddy, as his reference. Additionally, to welcome Ananya Panday, he introduced her as the Panday, who is rather chulbul. For the actress, Karan took the reference from her father, Chunky Panday, who is also known as Chulbul Panday.

2. Vijay About His Opinion On Cheese

After introducing the two, Karan Johar asked more about Vijay’s opinion on cheese. Vijay said that he was scared about where this was going. Then a little excerpt from the episode starring Sara Ali Khan and Janhvi Kapoor is played. Sara was to pick a celebrity she would like to date in the second episode. She initially denied it, and then she said Vijay Deverakonda. They discuss Vijay being on a cheese platter in this episode. Ananya Panday responds by asking whether she can share the same cheese platter.

3. Vijay And Ananya Shared Their Struggle

Vijay spoke honestly about his success in the Telugu film industry. The actor said that in his world, nothing is fair. He added that as an outsider with no links to the film industry, it was undoubtedly not an easy journey for him. Karan then raises the subject of daily trolling against Ananya.

Ananya Panday acknowledges how much it affects her, mainly when folks include her family members. Later, Vijay speaks about the criticism that Arjun Reddy received. The actor said he had nothing in common with his character in real life.

Karan asks Ananya in Koffee With Karan season 7 episode 4 about what was going on between her and Aditya. He asks this because earlier this month, there were rumors that the two were dating. As per Karan, he saw her at his party. Ananya initially responded to Karan’s question with disbelief and was at a loss of words. Ananya finally stated that she thinks Aditya Roy Kapoor is hot. In response, Vijay lets out a prolonged “Ohhh.”

Karan asks Ananya about her past relationship with actor Ishaan Khatter. To this, Ananya responded with a simple statement that she didn’t want to think about the past. In addition, he inquired about dating rumors involving the actor Kartik Aaryan. According to rumors, Ananya dated Ishaan for a few years. Nevertheless, Ishaan and Ananya never officially labeled their relationship.

Additionally, they took vacation trips together to Rajasthan and the Maldives. After collaborating in the movie Khaali Peeli, Ishaan and Ananya allegedly began dating. The two were together during actor Siddhant Chaturvedi’s Diwali celebration the previous year. At one time, KJo also asked about Ananya’s relationship with Kartik Aaryan. “We are just good friends,” she replied. The actress’s confession that she had a crush on Aryan Khan, though, shocked the audience.

5. Surprise Cameo Right At The End

KJo asked Ananya Panday and Vijay Deverakonda to call their celebrity friends during the final quiz round. They were asked to get them to say, “Hey Karan, it’s me.” The winner of the competition will be the one who manages to call the most celebrities. Ananya got none other than Kartik Aaryan on the line. She asked him to say, ‘hey Karan; it’s me.’ The call was in speaker mode. Additionally, she asked him to tell Karan what he was doing. Before he could answer, Karan interrupted and said Kartik might again be promoting Bhool Bhulaiyaa.

The actor confirmed his guess and said he was at home, promoting Bhool Bhulaiyaa 2. It’s not rare for a filmmaker to just call a celebrity. However, the phone call between Karan Johar and Kartik Aaryan is essential. The reason is that there were rumors that the two had a serious fallout last year during the shoot of Dostana 2. With this, fans get the impression that they didn’t get along.

Deverakonda was nervous because this was his first appearance on the chat show. However, he wasn’t shy in expressing how much he admired Samantha Ruth Prabhu. Karan then asks Deverakonda about the most attractive Indian woman. The Arjun Reddy actor mentioned Samantha’s name right away. The host then inquired as to whether Samantha was aware of his feelings. Vijay responded, “She knows that,” to this.

Karan also asked Vijay about his feelings for Samantha Ruth Prabhu. The actor said, “She is a darling. She is amazing. She is an incredible woman.” In the upcoming movie Kushi, Vijay and Samantha will appear together onscreen.

8. Winner Of Rapid Fire Round

The rapid-fire round of the show is the most viewed portion. The Koffee Gang has chosen the winner of this round this year, in contrast to prior seasons of the show. Vijay Deverakonda won the rapid-fire round on Koffee with Karan in episode 4. His witty, straightforward, and prompt responses were the cause of it. He got the most popular coffee hamper as a gift.

The audience is eager to watch this episode of Koffee With Karan as it is extremely popular. In the latest episode, this segment was full of fun and entertainment. Ananya Panday won this round in episode 4 of the show. MyGlamm is one of the sponsors of this chat show. Ananya received a beautiful gift hamper for winning this round.

Karan Johar posted the promo of this episode on his official social media handle. Samantha Ruth Prabhu and Akshay Kumar appeared in the previous episode of Koffee With Karan. Sara Ali Khan, Janhvi Kapoor, Alia Bhatt, and Ranveer Singh have all made appearances on the show so far. 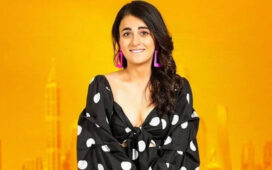