Shahid, Arjun And Ranveer Have Rejected His Offers We all know that Karan Johar hosts one of the most controversial shows named “Koffee With Karan”. There he plays the mastermind to get the candid answers out of the celebrities. However, this time he was on the receiving end. He along with, Shweta Bachchan Nanda was the guest in the first episode of the second season of BFFs With Vogue which is hosted by Neha Dhupia. The show is aired on Saturdays at 8 pm on Colors Infinity.

Shweta Bachchan-Nanda tried to get the best out of the opportunity and she said, “They must’ve said something about EDM one time, and every time we’ve hung out after that, Karan’s like ‘guys let’s put on some EDM,”. To this light-hearted humor, Karan Replied, “She’ll discuss all of them, not just Navya (Shweta’s daughter), but also Aryan, Suhana, Ananya”. “You think I hang out with them at parties, but at least I’m not stalking them.”

On being asked about the one thing that he would like to change about Shweta, Karan said, “I want you to stop wearing bed linen, and I want you to start wearing fabric that fits. You’re not as large as you think you are in your head.” Karan Johar opened up about his life. He told that the rejection is not a new thing for him. Karan chronically faces them. He said,”I’ve tried to cast Shahid Kapoor a couple of times and he’s said no. Arjun Kapoor has said no to me. Ranveer Singh has said no to two movies.”

Karan Johar did not hold back while sharing his secrets but Shweta refused to do so. She was asked who the most overrated actor according to her is, she remained silent. But Karan Johar pursued the fun further and said, “Amitabh Bachchan ki Beti hai, kaise bolegi.”

The show was full of entertainments. Moreover, it will return next week another dose of it and Alia Bhatt, Mahesh Bhatt, Juhi Chawla and Jackie Shroff are the future guests. Are you excited about the next episode? What is your thought on this episode? Share in the comments. 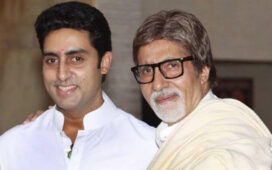