Ahmad Shah Abdali played by Sanjay Dutt is the ruthless king of Afghanistan. He along with his one lakh soldiers inroads towards India. They form an alliance with Najib-Ud-Daula with the intention to defeat Marathas. Sadashivrao Bhau along with his army started their rigorous journey from Pune to Delhi. During their journey, they form alliances with other kings to expand their army against Ahmad Shah Abdali. The battle of Panipat starts and it is the story of it.

There are very few directors in the Bollywood industry who knows the art of making periodic films and excel in it. The two most famous among them are Sanjay Leela Bhansali and Ashutosh Gowarikar. Ashutosh Gowarikar has done his research to perfection and the same is reflected in the movie Panipat. The movie is based on the Third Battle of Panipat which happened on January 14, 1761. The extraordinary sets of mountains, spectacular locations, brilliant cinematography, larger than life characters, and detailed storytelling are the positives of the movie. CK Muraleedharan’s director of photography deserves a lot of appreciation for bringing life to the movie and capturing the shots to a grand level. The lavishing sets and the costume designs are mind-blowing.

Arjun Kapoor has acted brilliantly. In the war scenes or in the love story with Kriti Sanon, his expressions were true. Kriti Sanon fits in the character beautifully. She is a surprise package and you can also say she steals the show. Kriti Sanon is not in the movie just for presence. She acts, she fights and she delivers what is required. Sanjay Dutt as ruthless king Ahmad Shah Abdali looks so real. The dance has been choreographed beautifully. But being a periodic war movie it misfits in the situations but still looks grand. The first half of the movie is slow and it is because it builds the story of the battle. The chemistry between Arjun Kapoor and Kriti Sanon looks good. Mohnish Bahl, Padmini Kolhapure, Zeenat Aman also fit their respective characters. Everything in the movie looks authentic and deserves every round of applauds. Though the length is too long, being a periodic drama, detailing is also required.

Even if you are not an ardent lover of periodic drama, you should watch Panipat. Panipat delivers and does full justice and gives an amazing representation of history. We give Panipat 3.5 stars out of 5.

This weekend will be a treat for moviegoers as both releases Panipat and Pati Patni Aur Woh are good in their genres. You can also check the reviews of Pati Patni Aur Woh. Have you watched any of them? How did you find? Let us know in the comments below. 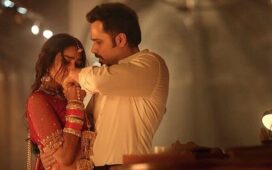