The Teaser Is Not Recommended For Weak Hearts The teaser of the Anushka Sharma starrer movie, Pari is out and has received the desired response on YouTube. The film is produced by Anushka Sharma who is also the lead actress in the movie. Judging from the first look, we are in for another dose of entertainment and throat drying action.

The Teaser Of Pari

The 50 seconds long teaser can strike fear in any mind. Anushka Sharma has seen the teaser as bruised and battered. No doubt, she is the one possessed by the demon in the movie. Moreover, the intensity that Anushka showed in the teaser is utterly high. She is exactly looking like a lady possessed and tortured by the evil spirits.

Left Us Curious And Craving More

In the end of the teaser we saw Anushka Sharma looking at herself but in demonic form, this made everyone curious about the story. This teaser left us craving for more. However, we have to wait until the film is released.

2018 is the year for the horror movies lovers. There are many movies that are scheduled to release this year. Check the list of those movies here; they will chill your spine for sure.

What do you think about the teaser of Pari? Don’t you think it is scary? Share your thoughts in the comments. 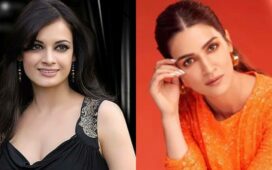