ULLU app that is known for its bold content has brought something different for its audiences this time. They have come  up with a thriller for its audiences, ‘Assi Nabbe Poore Sau.’ Vikram Mastal, Raqesh Bapat, and Aastha Chaudhary, starring web series Assi Nabbe Poore Sau Part I, is released. The trailer received a positive response from the audience. It is a story of the murderous killing of 100 innocent children. Raqesh Bapat and Vikram Mastal will be in a never seen before avatar. The show is inspired by the heinous crime of a man whose intention was to kill 100 children.

The story is based in Pakistan and revolves around Junaid, played by Raqesh Bapat. He marries Ruksaar portrayed by Aastha Chaudhary who already has two kids one girl and one boy. The next day after their marriage, Ruksaar’s child Shoaib gets missing. Soon it is revealed that Shoaib is murdered. Not only Shoaib but also there are around 100 children who were brutally killed. Junaid confesses his crime on the camera. Vikram Mastal, who is playing the role of the cop Farhan Khan takes this case. He has a history with Junaid in the past. However, in the court, the lawyer of Junaid accuses inspector Farhan of pressuring Junaid to accept this crime. Who is the killer? Is Junaid innocent and the police are trying to frame him? Watch the web series to find out.

Assi Nabbe Poore Sau is available on ULLU App. The series will have a total of eight episodes, with around 22 minutes each. The four episodes are released, and the remaining four will be released next week. The story is a suspense thriller and the people who like murder mystery will like this one. Both Vikram Mastal and Raqesh Bapat did something different in this web series. These kinds of roles they have never portrayed before. Vikram Mastal has put on around seven kilograms of weight to look like a cop. He did justice with his character. Aastha Chaudhary has not much screen space, but her expressions were good.

The screenplay is where the series disappoints. Normally, when we talked about courtroom drama, it naturally brings the adrenaline rush insides you. However, in Assi Nabbe Poore Sau, the courtroom drama will disappoint you. The lawyers are doing poetry unnecessarily that disconnects you with the story. At some point, you will find it irritating. In some scenes, the background score is loud that will make it difficult to understand the dialogues. Overall, if you like the thriller series,  Assi Nabbe Poore Sau is for you. 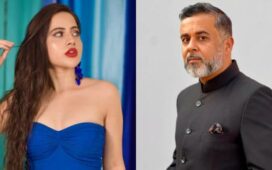