Rupali Ganguly rose to fame owing to her role in Sarabhai vs. Sarabhai. She played the role of Monisha Sarabhai. Her impeccable acting skills and comic role in the series gained a lot of appreciation from the audience. She is playing the titular role in the show Anupamaa currently. Anupamaa is one of the most popular television shows currently. The show is in the Top 5 in the BARC TV TRP ratings. Rajan Shahi Productions Anupamaa stars Rupali Ganguly, Sudhanshu Pandey, Madalsa Sharma, Aashish Mehrotra, Nidhi Shah, Paras Kalnawat, Anagha Bhosle, and Muskan Baamne in prominent roles. Recently, an audition clip of Rupali Ganguly is going viral.

In the video, Rupali Ganguly is seen auditioning for the role of Anupamaa. Her husband, Ashwin K Verma, has also confirmed in the comments that it is indeed her audition clip from last year. Watch the video below.

Rupali Ganguly married businessman Ashwin K Verma in 2013. The duo has one son named Rudransh, who was born in 2015. In Anupamaa, Rupali Ganguly is playing the role of Gujarati homemaker. The serial is one of the most-watched shows on Indian television currently. Rupali Ganguly is getting praised for her role in the serial Anupamaa. She is also the highest-paid actor in Anupamaa.

Anupamaa telecasts every Monday to Saturday at 10:00 PM on Star Plus. Do you watch the serial Anupamaa? Which character in the serial is your favorite? Let us know in the comments below. 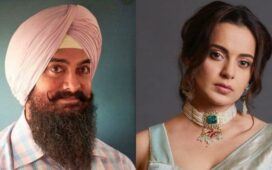