Finally, after a long wait, Brahmastra is released in the theatres. The expectations from the film are sky high. Brahmastra is made on a whopping budget of INR 410 crores. It is released on over 8000 screens worldwide, 5000 in India, and 3000 globally. Brahmastra stars Ranbir Kapoor, Alia Bhatt, Amitabh Bachchan, Nagarjuna, Mouni Roy, and Shah Rukh Khan. It is not an ordinary Bollywood film; it has magnificent visual effects, love, lights, and stellar performances.

The story revolves around Shiva (Ranbir Kapoor). He is an orphan and a DJ in Mumbai. Shiva meets Isha (Alia Bhatt) and instantly falls for her. He starts getting flashes from the parallel set-up. Shiva is aware of his powers and wants to bury them deep inside himself and live a normal life. However, destiny has some other plans for him, and soon, his life turns upside down when Junoon (Mouni Roy) is out to get pieces of broken artifacts of Brahmastra. Before the interval, the film introduces you to the Astraverse. The Astras are made of basic elements of the earth, like air, water, and fire. There are three artifacts of Brahmastra with different people. Shiva meets ashram Guruji (Amitabh Bachchan) while he tries to stop Junoon. What happens next forms the rest of the movie.

Ayan Mukerji’s film promises to be the biggest entertainer and never seen before cinema in Bollywood. His vision of astraverse and the efforts taken to make this kind of different cinema are commendable. He has handled the grandeur brilliantly. Yes, there are scenes that are borrowed from Hollywood. However, this astraverse is a visual extravaganza. The VFX and CGI are the first of their kind, perhaps in any Indian film.

The film borrows from Indian mythology. One thing that could have been much better is the story and narration. There are some portions that are not properly elaborated and also seem confusing. The screenplay also falls a bit; some scenes are stretched much and could have been trimmed to save screen time. The cinematography is breathtaking. The music is a cherry on the cake with the song Kesariya is already a chartbuster.

Talking about the performances, Ranbir Kapoor is convincing as Shiva and delivers a brilliant performance. Alia Bhatt looks beautiful, and the chemistry between the two is electrifying. Amitabh Bachchan, as Guruji, leaves a solid impact.

Nagarjuna is also in a prominent role and not just a cameo. Mouni Roy is outstanding. She breaks her Naagin persona with her career-changing performance. Shah Rukh Khan, in a cameo, gives you a clap-worthy moment. The chase will continue in Part Two: Dev.

On the whole, Brahmastra has some excellent visual effects, stellar performances, magnificent VFX, and melodious music. The only part where the film lags is its flawed writing. Overall, Brahmastra is not a flawless film but definitely deserves your attention for trying something different and making such kind of cinema. We give Brahmastra 3.5 out of 5. 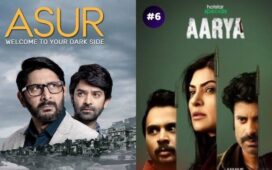