The winner of Season 11 of Bigg Boss and a popular actress Shilpa Shinde is involved in a controversy these days. She is currently doing Dhan Dhana Dhan on Jio Live with popular comedian Sunil Grover, Sugandha Mishra and others. Her show is doing well and fans are liking her work. But recently Shila Shinde is in the news because of her one tweet. She shared the link to an adult video on her social media Twitter site.

An adult MMS video went viral on social media last year. The video to feature Shilpa Shinde on the bed in a compromising position. She discussed this in the Bigg Boss house and also blamed Vikas Gupta for this. She said that it was an attempt to destroy her career.

No one remembered it until recently when Shilpa tweeted the link to an adult video. Here, check her tweet: According to her, this is the original video of that viral one and that this was all done to defame her. She got mixed reactions from the social media. Some are slamming her to share such content on her Twitter where she is an inspiration to the fans. Also, people are saying that this is unfair to the ones in the video as there is no permission to circulate this like that publicly.

Shilpa’s BB rival Hina Khan and her boyfriend Rocky also slammed Shilpa for promoting such content. Rocky first reacted to this issue and tweeted that how could she post without the consent of the people in the video. In another tweet, Rocky said that this is really irresponsible of Shilpa if she is considering herself a victim of such acts then how can she do the same to some other woman. Check out both his tweets:

Later, Hina also supported Rocky and said that actors should be careful and responsible in posting online. Here look what Hina tweeted:

Sad..anyone’s fans or regular trolls may get away by saying anything on SM but as a public figure we get a power to be able to reach to millions with just one tweet and at least we should be very careful n responsible. Specially in these times, real life is not a reality show ! https://t.co/T4mro52L5t

While this is a serious matter but sharing and promoting adult content online is seriously not justified. Recently, Shilpa supported comedian Kapil Sharma. Click here to know what she said about him. 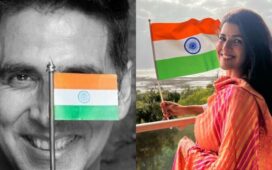