As per the reports, Ajay Devgn launched the multiplex chain NY Cinemas a few years ago. It has been named after Ajay Devgn and Kajol’s children – Nysa Devgan and Yug Devgan. A trade analyst Taran Adarsh wrote,

Kangana Ranaut took to her social media and shared a tweet of Taran Adarsh in a story and praised Ajay Devgn. She wrote in a story,

“This is the best and most effective way a superstar can utilise his resources and influence, not only it generates employment it also increases our screen count… Number of screens in India= less than 7000. Number of screens in China= more than 70,000. Congratulations sir @ajaydevgn.”

Earlier, during an interview with Mirror Now, Kangana Ranaut was asked whether she believed in the Bollywood Bonhomie comment of Ajay Devgn. She said,

“Ajay Devgn goes and does a role in a female-centric film. But will he do that in my film? I will be more than obliged and I will be more than grateful if he does. If he supports my film how Arjun (Rampal) has. Of course, it is quite evident that they don’t want to. I think all the actors should support me as I support them.”

Kangana Ranaut has shown a good gesture by appreciating Ajay Devgn. What do you guys think about Kangana Ranaut’s gesture? Let us know in the comments below. 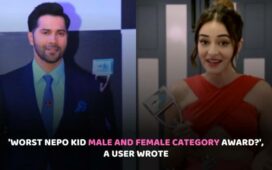