Recently, in an interview with Faridoon Shahryar of Bollywood Hungama, a fan asked about the kind of girl he would want to marry. After thinking for a while, Kartik Aaryan replied to the question that he wants to marry a girl someone like Deepika Padukone. He explained that she is the one who shows off her husband proudly.

Another fan asked the question that Kartik Aaryan looks super awesome with Katrina Kaif in the award show, when can we see both of you in a movie? To which Kartik Aaryan replied that he looks even better with Deepika Padukone.

Check out the video below.

Kartik Aaryan: "#DeepikaPadukone – One who shows off her husband proudly" #RanveerSingh #kartikaaryan

Chhapaak actress Deepika Padukone married to Ranveer Singh in 2018 after dating for six years. Ranveer Singh and Deepika Padukone are one of the red hot couples in the Bollywood. The duo worked together in movies like Goliyon Ki Raasleela Ramleela, Bajirao Mastani, and Padmaavat. They will next be seen together in the upcoming Bollywood movie 83 The Film. It is the biopic of Kapil Dev and India’s journey of their first Cricket World Cup victory in the year 1983. Ranveer Singh is playing the role of Kapil Dev, while Deepika Padukone is portraying the character of her wife, Romi Dev. The image of the duo was also got viral on social media. As per the latest updates, the movie will release directly in theatres and not directly on OTT platforms.

That was terrific answers by Kartik Aaryan, and we all agree with him. 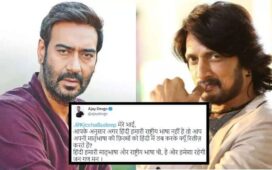