The Shows Have Struggle Chronically To Get TRP It is the prime objective of the TV shows to grab TRP and to make their names in the list of most popular TV shows. We see chronic variations in the top-ten list. Last month, the show Bepannah started and without wasting any time it made its name in the top 5 shows in the terms of TRP. Now the show is no longer on the list of top ten. Moreover, good news for the fans of “Ishqbaaz” as the show managed to enter the list of top ten most popular shows. Although, there is no growth in the TRP of the show the TRP of the other shows degraded and eventually helped Ishqbaaz to climb in the list. Here are the top ten most popular TV Shows with highest TRP this week.

The romantic drama serial had struggles increasing the TRP. However, with the TRP of 1.7 points, the show managed to enter the top ten.

Kullfi Kumarr Bajewala witnessed slight decrement in the TRP. To conclude, the show slipped to the ninth spot in the list.

Taarak Mehta Ka Ooltah Chashmah was in the top-5 last month with the TRP of 2.8. However, the TRP chronically reduced and this week it was measured to be 1.9. Moreover, the show landed on the eighth spot.

Last month, Shakti Astitva Ke Ehsaas Kii was on the sixth spot and it managed to hold its spot. However, there is a slight fall in the TRP as last month it was 2.6. 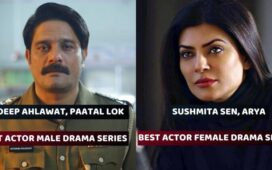