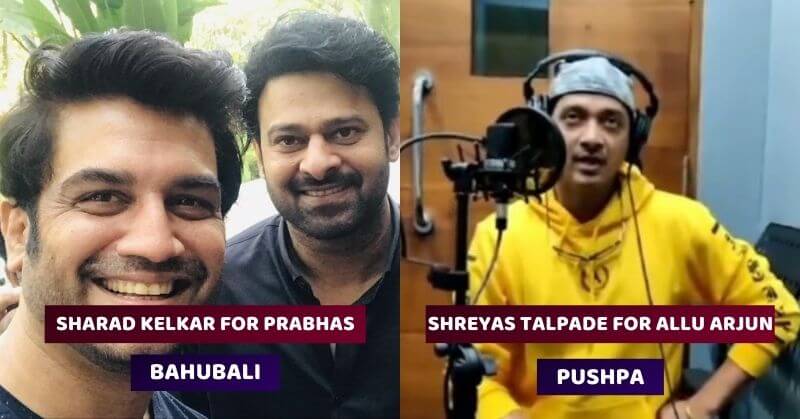 Pushpa: The Rise, starring Allu Arjun, has busted box office records and continues to dominate your OTT screens in five languages (Telugu, Tamil, Malayalam, Kannada, and Hindi on Amazon Prime Video). Pushpa, in particular, has garnered a resounding reaction in the Hindi market. Taking advantage of this success, the makers of Ala Vaikunthapurramuloo, which stars Allu Arjun, Pooja Hedge, and Tabu, have chosen to re-release the film in Hindi. Ala Vaikunthapurramuloo is also getting a Hindi remake starring Kartik Aaryan and Kriti Sanon, titled Shehzada. Right now, Hindi-dubbed South films are all the rage. But who are the people behind these colossal successes? Here’s a list of dubbing artists who have given Hindi voices to some of the most recent South blockbusters.

THANK YOUUUU FOR YOUR LOVE! I am beyond happy with the kind of response my voice has gotten in #PushpaHindi 🙌🏻❤️
Keep the love coming. @alluarjun kya Recordतोड़ dhamaka किया hai! #Pushpa…jhukkega nahi and blockbuster numbers…rukkega nahiii😎 pic.twitter.com/ioB1GDOPvC

For the Hindi version of Pushpa, actor Shreyas Talpade provided his voice to Allu Arjun. He recently thanked his supporters on Twitter for their support of the Hindi version. “THANK YOUUUU FOR YOUR LOVE!” the star tweeted. I’m ecstatic with the response my voice has received in #PushpaHindi. Please keep the love flowing.

Sanket Mhatre is one of the most well-known voice actors. He has contributed his voice to a number of national and international projects, including Suriya’s Soorarai Pottru, Kaappaan, Jai Bhim, and others. He is Allu Arjun’s, Mahesh Babu’s, Ram Pothineni’s, and Jr NTR’s official Hindi voice. Sanket has played All Arjun in films such as DJ, Sarrainodu, S/O Satyamurthy, and others. He also dubbed Mahesh Babu’s films The Real Tevar, The Real Tiger, and Encounter Shankar.

Sharad Kelkar is a voiceover and dubbing artist as well as a well-known television personality. He’s in high demand in Bollywood, and he can back it up with a stellar career. In Baahubali, he was also the Hindi voice behind Prabhas. Aside from that, he’s appeared in major films such as Mad Max: Fury Road, Exodus: Gods and Kings, The Return of Xander Cage, X-Men Apocalypse, Guardians of the Galaxy, and others. Sharad has said that he had just auditioned for the voiceover because he wanted to meet SS Rajamouli.

Rajesh Kava For Vijay And Dhanush

Rajesh Kava has voiced actor Vijay in a number of films, including Super Hero Shehanshah and Thirumalai. He also provided Dhanush’s voice for the Hindi dub of his film Thanga Magan. Singam II, Lingaa I, and Brahmotsavam are some of the other films for which he has dubbed.

Actor Rana Daggubati’s official dubbing voice is Manoj Pandey. He played the actor in films such as Baahubali and Krishna Ka Badla, among others.

Vinod Kulkarni has voiced Brahmanandam in a number of films, including Rebel, Kandireega, Doosukeltha, Arya 2, and Power.

Were you aware of these dubbing artists? Whose voice surprised you the most? Let us know in the comments below.