Sakshi Review: Vikram Mastal And Madhumita Biswas Movie Is A One Time Watch

Sakshi Review: Vikram Mastal And Madhumita Biswas Movie Is A One Time Watch Vikram Mastal and Madhumita Biswas’s new movie Sakshi is released today at the theatres near you. The audience liked the movie trailer that was released on the official YouTube channel of Zee Music. The movie is a one-time watch as there is no other big movie released in the theatres. It is the second movie of Vikram Mastal and Madhumita Biswas together after the movie Suspense. Sakshi also has Yugansh Juneja, Narendra Bedi, and Shiva Rindani in pivotal roles. The movie is directed and produced by Ajay Ram and presented by Sardar Kishan Singh.

The movie starts with Virat, played by Vikram Mastal, and Prachi, portrayed by Madhumita Biswas, who are engaged. Virat shifted to a new city for new work. Here he meets Sakshi. Sakshi is impressed with Virat and falls in love with him. Virat initially hesitates as he is already engaged. However, Sakshi walks down to his home, and the duo spends the night together. Virat starts liking Sakshi, but the twist comes when Prachi drops down to Virat’s house to give him a birthday surprise. What will happen when Prachi gets to know that Virat is cheating on her? Watch the movie to find out.

Sakshi is one of the biggest movies releasing in theatres after the coronavirus pandemic. It is of small duration, around 1 hour 52 minutes. The story of the film could have been picturized much better. The music is the soul of the movie. The songs Ba Khuda, Kasam Tumko Ye Meri Hai, are already hit. The Ba Khuda song is a delight to watch because of its exotic locations. Vikram Mastal and Narendra Bedi comic scenes can give you some lighter moments in the movie. In the second half, the character of Vikram Mastal looks half baked. Madhumita Biswas did better from her previous movie Suspense. Still, there are few emotional scenes in the movie in which she could have done better.

Some dialogues have mistakes, but overall can be avoided. Yugansh Juneja has nothing much to do in the movie. The screenplay disappoints in the film. The background score in the second half spoils the theme of the movie. The visual effect also looked ordinary. The director Ajay Ram tried his best to give the audience a good movie. However, as we know, movie-making is a collective effort; it lacks down in some aspects. As it is valentine’s week, the audience does not have fresh content to watch in the cinema halls; Sakshi can be a one-time watch.

Have you guys watched the movie? How was it? Let us know in the comments below. 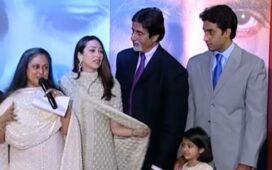