Director Ajay Yadav’s Suspense movie starring debutant Vikram Mastal, Madhumita Biswas and Antra Banerjee hit the theatres today.  This small budget thriller will definitely emerge as a Winner. Though it will get tough competition from big movies like Badla which also released today, Suspense will definitely create an impact at the Box Office because of its story, low budget and powerful performances of actors.

It is a story of five friends who Arav, Shikha, Abhishek, Hetal, Vikki and Vidyut. Arav and Shikha deeply in love with each other. They all go on vacation once a year. They all went for a vacation and stay in a bungalow, which belong to Vikram Singh. Madhumita Biswas has played the role of Vikram’s wife. The twist comes when friends get killed over there at Bungalow. Who is the murderer? Why he or she is killing them? Is Vikram has something to do with it? For all these answers, you need to visit your nearest cinemas.

Suspense has proved that content is king. If the story is good, it will do wonders. Director Ajay Yadav has directed this brilliantly which led to the audiences kept on guessing till the very end of the movie. Ajay Yadav gave chance to new people and they have done justice with their roles. Vikram Mastal stand out performance will definitely get praise everywhere. He has done full justice with his role of Vikram. Vikram’s character has various shades and he has proved that he will be the next big thing in Bollywood.

The songs of the movie are already hit specially Libas which is picturized on Vikram Mastal and Antra Banerjee is brilliantly composed and it is making people tap their feet on the rhythm of Libas. Trailer of the movie was very well received. Overall, Suspense is a thriller which has Suspense till the last minute and it also justifies its title. We give 3.5 stars out of 5.

How many of you watched the movie Suspense? Did you like it? Tell us in the comments. 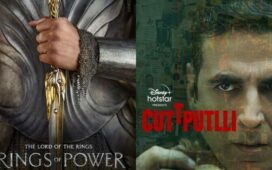