After the first season of Shark Tank India was a success, Ashneer Grover gained widespread popularity. However, he is not present in the recently out second season for some reasons. Amit Jain, the founder of CarDekho, has taken his place. The second season of the show is already amusing Indian viewers by returning to the world of business proposals, equity, and entrepreneurs. Nevertheless, Ashneer’s brutal honesty and witticisms on Shark Tank India are something that the viewers miss. They also believe that he was the reality show’s heart and soul. With the publication of his book, Doglapan, Ashneer has continued to make headlines while not appearing on the show.

Ashneer Grover Writes How Kiara Advani Got Him Divorced

Ashneer Grover, who is popular after appearing on Shark Tank in India, is recently teasing that a Bollywood actress nearly caused him to get “divorced.” In several interviews, Grover made fun of the hilarious story. He insisted on keeping the actor’s identity a secret and said readers would have to read his book to learn who the actress was. Finally, a book by Ashneer Grover, Doglapan: The Hard Truth about Life and Start-Ups, was just out. Additionally, “When Kiara Advani Almost Got Me Divorced” is the title of a chapter in the brand-new book Doglapan.

Ashneer Grover further said that Madhuri’s face fell when she heard this and that she did not at all find the talk funny. Additionally, he noticed a sudden shift in her body language. He also mentioned that they had to leave that evening for the shoot in Mumbai. Madhuri, however, sat silently and avoided eye contact with him. Finally, she yelled, “Tumhe Kiara Advani se shaadi Karni hai,” and started taking her jewelry off.

Ashneer was not ready for this. Additionally, his wife raged at him for the next 30 minutes. She also said that she was the one who insisted Ashneer for doing Shark Tank India. He added, “Through this tirade, I sat with my hands held out, holding her jewelry, which she had unceremoniously dumped on me.” Furthermore, Ashneer decided to share the story with his fellow “sharks,” which gave them a reason to pull his leg.

In a recent interview, Ashneer claimed that he “dominated” the Indian edition of Shark Tank. He also said that doing so any longer would be unfair. Meanwhile, Kiara is soon going to tie the knot with her long-time boyfriend, Sidharth Malhotra very soon. 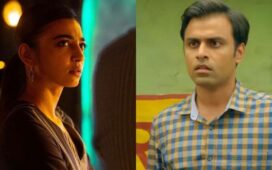