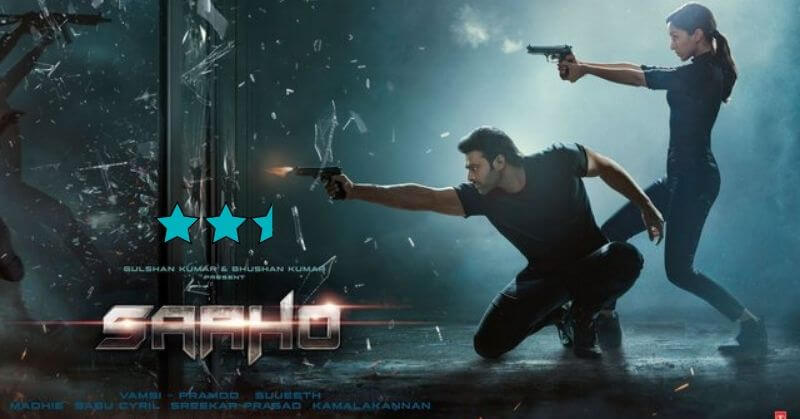 Saaho has one hero Prabhas who is coming after two big blockbuster movies Baahubali and Baahubali 2 and heroine Shraddha Kapoor with many villains. The head of the villain is apna Bhidu Jackie Shroff playing the role of Roy. There are many villains who work for Roy from different locations. Saaho starts with a big robbery in Mumbai. There is a black box which has many secrets of villains and they want to find it out by hook or crook.  How Prabhas will deal with so many villains? Will Shraddha Kapoor who is playing the role of the cop help him or she will be on the other side? Watch the movie to get these questions answered.

Without a doubt, Saaho has too many high-octane bike chasing, car chasing action scenes. But one thing which hides in this action scenes is the biggest thing, the story of the movie. The story of the movie is the weak point of Saaho. Poorly written story and screenplay and amateur direction are the biggest disappointment of Saaho. You must say Director Sujeeth lost an amazing opportunity. The background score and the music is good but not out of the box. The character of Prabhas fits in its role, but honestly nowhere close to its character of Baahubali. Prabhas slow dialogues are kept intentionally to keep suspense in his character.

Shraddha Kapoor character is not written perfectly, her character could have done much better but it ends up looking glamours only. Her character needs a helping hand from Prabhas against goons. The chemistry between Prabhas and Shraddha Kapoor does not have the charm and you will feel the chemistry is missing between the duo. Jackie Shroff has a small but important role in the movie. Neil Nitin Mukesh looks good but it is Chunky Panday who is a surprise package as a villain in a movie. Chunky Panday gave an impressive performance and shines in this big-budget movie. His daughter Ananya Panday also gave an amazing performance in her debut movie Student of the Year 2. The special effects in the movie are not up to the mark. But the action scenes and sequence can keep you entertained.

The movie can be watched for Prabhas and its action sequences. We give this Prabhas movie 2.5 stars out of 5. Have you watched the movie? How did you liked? Let us know in the comments below.